On Sunday 10th September, the rain stayed away for Northwood's annual Junior Finals day which covered a number of different age groups, all battling to become 2017 Northwood junior champions.

In the under 9 competition, after some very good matches, Tasir Shariff beat Shreeyansh Saskaso To become this year's champion. Well done Shariff

In the under 12 years competition, after some close fought matches, this year's final featured both of last years finalists, Alex Andelkovic and Serena McCarthy. After an exciting match, Alex once again prevailed, beating Serena 4-2. Congratulations Alex.

In the 16&Under Boys Tom Herdman faced Teddy Mangan in the final and this produced some high quality and exciting tennis. Tom finally won the match to become the champion. Well played Tom.

There was tough competition in the under 16 girls finals competition. After a close semi-final match between Hermione Peart and Hannah Ghosh, Hannah went through to the Final where she faced the 2016 winner, Anisha Shah, who had defeated Alicia McCarthy in this year's semi-final. 2017 was Hannah's year as she became this year's under 16 girls champion, beating Anisha 6-0. Well done Hannah.

Well done to all of those who played and congratulations to our 2017 Junior champions. 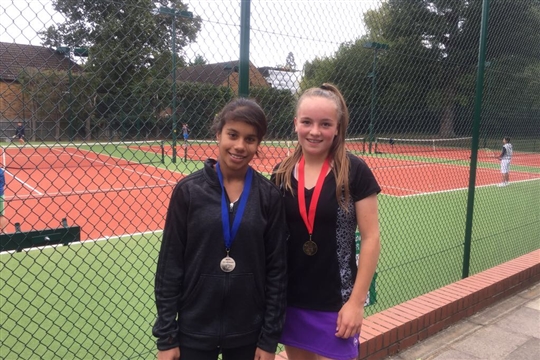